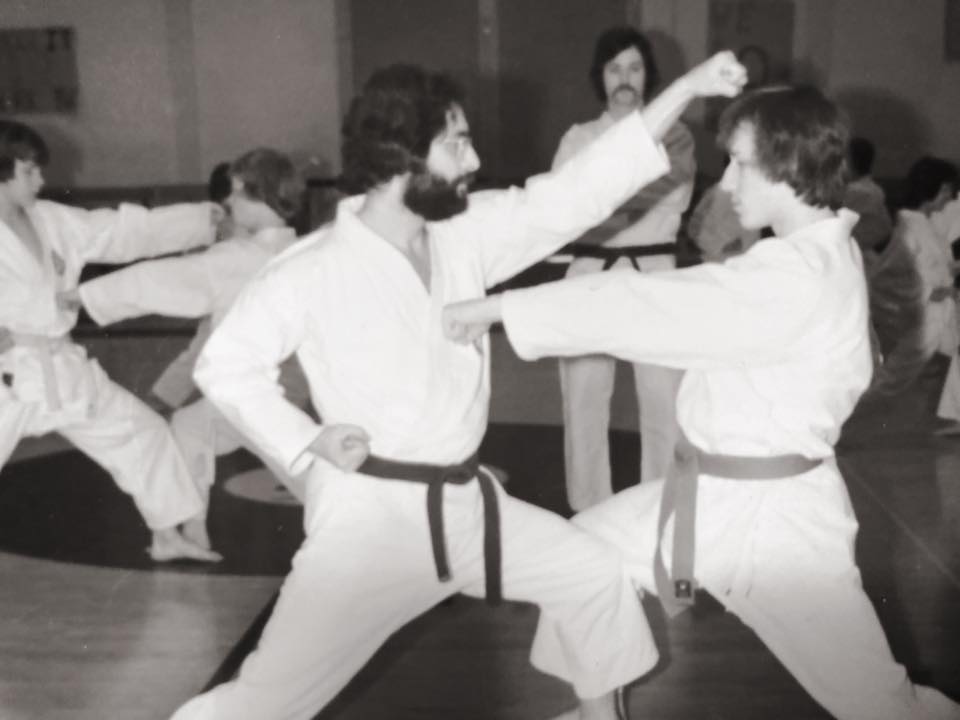 “That’s one small step for karate; one giant leap for martial arts.”

1969 was a glorious time to be alive; a new home cost a paltry $15,000, 90% of kids walked to school, and Woodstock was in vogue.  America was on top of the world as Neil Armstrong set foot on the moon, Mario Puzo released The Godfather, and a little known dojo named “Allegheny Shotokan” set up shop in the gritty suburbs of Pittsburgh, Pennsylvania. Yes, it was the golden era of Karate, and those who donned a crisp white “gi” and tattered black belt had a special swagger about themselves.  The martial arts were provocative and mysterious, and if you wanted to learn its vast secrets, Bill Viola was your man. Unbeknownst to him, the Viola name and Pittsburgh karate would become synonymous.

“Sensei” Viola was a no-nonsense disciplinarian who lived the mantra, “The more you sweat in here, the less you bleed out there,” an ode to his simple yet effective philosophy of intensity and self-protection.  This sense of unwavering willpower has manifested itself through the tens of thousands who have trained under his hand.  Over the past half-century, his powerful brand of punches and kicks has camouflaged life’s most important lessons: respect, discipline, and focus.  The Viola’s preach, “Character is a commodity that can’t be bought, only built.” You aren’t rich until you have something money can’t buy, and for Viola his passion is priceless.  The confidence he has instilled in his students can be found on and off the mat, from the classroom to the boardroom, or from raising a family to protecting a loved one.  Viola smiles, “It’s that indomitable spirit that builds champions in life. Our dojo is a family.”

Allegheny Shotokan Karate (1969-2019) is celebrating its 50-year anniversary as the gold standard for martial arts in Western PA.  The family-owned and operated dojo is blessed with 3 generations of Violas who carry on the legacy.  All five of Viola’s children have earned black belts and his eldest, Sensei Bill Viola Jr., now heads the school. Viola Jr.’s daughter Gabby and son Will [William Viola IV] are fixtures at the martial arts studio.  Sr.’s other children Joce and Jacque are Doctors of Pharmacy in North Huntingdon, Addie, a teacher in Bethel Park and Ali, a Lawyer downtown. He’s proud that their karate foundation has helped them pave the way for fulfilling careers.

Viola Sr., now 71, still teaches his black belt class every Monday evening, a reminder to everyone that karate is a lifelong journey.  In fact Ray Adams, 76, joined the club in 1971 and is still actively training today. He is the longest tenured student and says, “I just earned my Master rank and have no plans of slowing down, my next test will be in my 80s.” One of Adam’s favorite training partners and the dojo’s first black belt was Jack Bodell.  Known as the “President’s Bodyguard” as a member of the United States Secret Service in charge of protecting President Jimmy Carter, Jack explains, “Sensei gave me the skills to succeed in life.” Jack Bodell, Ray Adams, Ray Walters, Dave Zezza and Viola Jr. round out the “Master” ranks at Allegheny Shotokan.  Viola Sr., 9th Degree Black Belt, remains the patriarch.

Viola Karate (as it’s more commonly known today) accolades include induction into the prestigious USA Karate Hall of Fame, who named “Sensei V” the Man of Year (2003).  In 2011, Viola was honored with a permanent exhibit installed at the Western PA Sports Museum and Senator John Heinz History Center recognizing him as the co-creator of the sport of Mixed Martial Arts (the display is located next to the Franco Harris “Immaculate Reception”).

Jr. and Sr. are both official Sport Karate History Generals and recipients of the Sport Karate Museum’s “Lifetime Achievement” award.  The duo was awarded the Champion Associations Willie Stargell M.V.P. Award (2011) for community service, a tribute that includes Michael Jordan and Muhamad Ali as alum. In 2017 the Viola’s were published in the book, Who’s Who in the Martial Arts – Legends of American Karate edition.  Viola Sr.’s life was the subject of the Amazon #1 selling book Godfathers of MMA which in turn inspired the SHOWTIME documentary film Tough Guys (2017) produced by an Academy award winning team. Viola Jr., who authored the book, was also a producer on the film, making a cameo playing his father.

Viola Jr. has been a member of Screen Actors Guild since 2000 after a stint in Hollywood which included stunts, commercials and work on the Britney Spears “Stronger” video. He founded his entertainment company [Kumite Classic] after Injuries sustained in a car crash that ended his competitive career (1999). The company produces the Pittsburgh Fitness Expo (regions largest multi-sport convention) and has a publishing division which has included Kumite Magazine and Tough Guys.  Viola Jr. is currently adapting his book into a screenplay and is in negotiations for a major motion picture. He was featured in Pittsburgh Magazine “40 under 40” list in 2016. Viola Jr. has since created the CommonSensei self-help book series.  Here are some of his famous quotes.

The dojo is internationally renowned as the most successful sport karate school in Pittsburgh region, garnering the only dual Pan American Gold Medalists in both traditional karate (WKF) and kickboxing (WAKO), as well as countless national, international and world titles.

In 1998 Arnold Schwarzenegger recognized them as the #1 school in America and Hines Ward selected Viola’s students as Positive Athletes to represent marital arts (2012-2013).

As karate approaches its first Olympic berth at the 2020 Tokyo Games, Viola was instrumental in the movement as he hosted the USA Karate Jr. Olympics at the University of Pittsburgh’s Fitzgerald Field House in 1992 under the auspices of the United States Olympic Committee. Incidentally, Viola Jr. was a triple Gold Medalist, the only athlete to earn that status. In March 2019, USA Karate honored Viola with the “Pioneer of USA Karate” award for his dedication to the Olympic karate movement. The Viola dojo has always had its finger on the pulse of anything and everything martial arts, and continues as the heartbeat of Pittsburgh karate today.

Over the past fifty years, the school has welcomed and transformed everyone from children struggling with autism to Olympic level competitors.  “It doesn’t matter if they are a professional athlete or a teenager who is coping with bullies,” Viola Jr. says,   “Each and every student is on their own personal journey of self-enlightenment and courage. Our goal is to help them reach their potential and go beyond.”  This formula of empowerment inspired Viola Jr. to package the family secrets into an Award-winning curriculum—Sensei Says. This life skills education course is the cornerstone of Allegheny Shotokan’s sister programs Norwin Ninjas (4-7 year olds) and Nursery Ninjas (2-3 year olds).

Viola got his first taste of combat sports in 1955 studying boxing from family friend, the legendary Marion “Slugger” Klingensmith (later to become the Pennsylvania State Athletic Commissioner, Brownsville Mayor and Police Chief, Fayette County Commissioner, and Congressman). He discovered martial arts in the early 1960s as a teenager in high school.  Viola recalls, “My friend Medick Capirano picked up karate at WVU in the ROTC program.  I thought I was pretty tough, but he threw me all over the room when we’d work out on the weekends.  I was addicted.”  He continued training throughout college at California State under The All American Karate Federation, a split-off from the Japanese Karate Association, and then gaining rank under icons Grand Master Robert Trias, the father of American Karate, and Grand Master George Anderson the founder of the Father of Olympic Karate.

The name “Allegheny” represented the school’s first location in Allegheny County (East Allegheny High School) and traditional “Shotokan,” is the base style of Japanese Karate-do taught. Viola began teaching students in the summer of 1969.  His first student was former California State football player Denny Costello, and droves of EA students followed.  The first teacher to join the ranks was Keith Bertoluzzi. Bertoluzzi was the Master of Ceremonies at the Holiday House, Monroeville, PA. He used his musical influence to invite visiting celebrities to attend karate classes including members of the Beach Boys and other musical acts of the era. As Shihan Viola remembers, “Karate in the 60s and 70s was so popular; we [the Senseis] were the rock stars.” By 1971, East Allegheny had become what is known as a “progressive” school incorporating new curriculum.  The district offered Viola the opportunity to teach a regular elective karate course, the first in the nation in a public school.   Over the past 50 years the school has held classes in the suburbs of Pittsburgh including North Versailles, Turtle Creek, Paintertown, White Oak, Irwin, North Irwin and currently residing in North Huntingdon, Pennsylvania.

The school is endorsed by Western PA Police Athletic League (PAL) where Viola Jr. served as a goodwill ambassador as a youth.  He has been involved in charitable work since his senior year at the University of Pittsburgh, when he established “Kumite International” collegiate scholarships.  The partnership program with Western PA Police Athletic League and Eckert Seamans Law Firm allocated $50,000 in scholarship funds for karate athletes.  The program made national news when Lynn Swann (The Chairman of President George W. Bush’s Council of Physical Fitness and Sports) presented the scholarships with Viola Jr. at the 2004 Pittsburgh Fitness Expo / Kumite Classic in Pittsburgh (the mecca for martial arts competition).

The dojo has raised tens of thousands of dollars for various causes such as Muscular Dystrophy and Parkinson ’s disease.  In 2017 Viola Jr. and former State Senator Sean Logan created “Kick Parkinson’s Disease”– a cause close to both men as Logan was diagnosed with Parkinson’s disease in his mid-forties and Viola Jr. spent years caring for his Grandmother who passed away from neurodegenerative complications.  The Viola Karate Dojo has since made it their mission to KICK Parkinson’s disease—literally.  Each year they assemble hundreds of students to kick one mile non-stop though the racetrack at Boyce Park in Monroeville in conjunction with the Logan’s PIND (Pittsburgh Institute for Neurodegenerative Diseases) 5K.  The students showcased their skill during record setting heat in 2018 and bumped their 2-year donation to $15,000 to aid PIND.  The In all, over the past three years, the event has raised over $1 million dollars through appropriations, grants and sponsors — 100% of the funds are earmarked for experimental testing and research in hopes of finding the cure in Pittsburgh.

In 2019 Viola Jr. and his Daughter Gabby will begin advocacy efforts at the Capital to lobby for improvements to our healthcare system as she battles inflammatory bowel disease (Crohns Disease).