North Huntington resident Bill Viola Sr. received the “Pittsburgh M.V.P.” award for his work as a Mixed Martial Arts pioneer.  Viola co-founded CV Productions in 1979, a company which is credited with creating a new sport, known today as mixed martial arts..   The award brought recognition to the city of Pittsburgh and the Western PA region celebrating the true birthplace of modern Mixed Martial Arts in the United States.  Most fight fans had believed that the UFC (Ultimate Fighting Championship) established the first mixed martial arts competitions, however Viola and his partner Frank Caliguri actually developed the sport in 1979.  They promoted 10 competitions across Pennsylvania in 1980 until the State Legislature banned mixed martial arts with the passage of  SENATE BILL No. 632 Session 1983. The Western Pennsylvania Sports Museum of the Heinz History Center in conjunction with the Smithsonian Institute unveiled an exhibit on June 23rd 2011 to document Viola’s role in developing mixed martial arts in America.  Dr. Fred Adams of Penn State University is currently writing a new book the history of Mixed Martial Arts that will chronicle Viola and Caliguri’s creation.

Over the past thirty years, The Willie Stargell Banquet has attracted some of the countries most prolific figures including basketball legend Michael Jordan and  World Boxing Champion Muhammad Ali.  Viola was honored to be recognized with such an elite alumni.   Viola said, “Pittsburgh is known as the City of Champions and now they can have pride that the fastest growing sport in the World (MMA), was started here as well.”  Dr. Fred Adams of Penn State University is currently writing a new book the history of Mixed Martial Arts that will chronicle Viola and Caliguri’s creation.

Other distinguished guests and honorees at the 2011 banquet included Pittsburgh County Executive Rich Fitzgerald and Judge Dwayne Woodruff just to name a few.  The event was co-sponsored by The Hillman Foundation and the Pittsburgh Pirates.  The banquet was hosted by Champion Enterprises founder Bill Neal, who has dedicated his life to community service.  Proceeds from the event support a Christmas Toy drive for underprivileged kids in Pittsburgh. 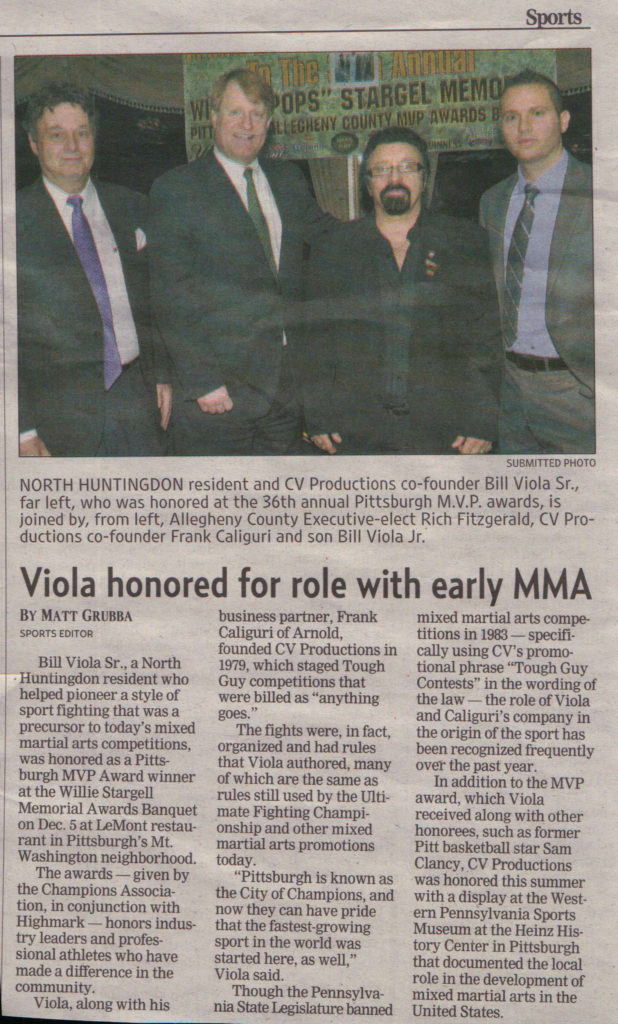