The annual ceremony honors business leaders and professional athletes who are making a difference in the community, and this year, North Huntingdon resident Bill Viola received the Pittsburgh MVP honor for his work in the fitness and martial arts industry.

Viola is a promoter and entertainment entrepreneur credited with producing the Kumite Classic.

He is recognized as national and international martial arts champion competitor and coach.

He has been noted as the most successful sport karate athlete in Pennsylvania State Karate Rating Association history and was honored by Arnold Schwarzenegger as a World Champion in 1998.

His professional success is in direct correlation with his personal passion, martial arts.

Viola has been recognized as a USA Karate All-American athlete, and he online casino was inducted into the National Black Belt League Hall of Fame.

Norwin Ninjas is a specialized program in the North Huntingdon area developed for children ages 4- to 7-years old to help instill respect in discipline.

Norwinninjas.com is quickly becoming a popular website among parents looking to teach their children the importance of setting goals and staying in shape. Viola was commended by the association for his work with youths. 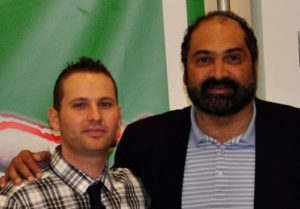