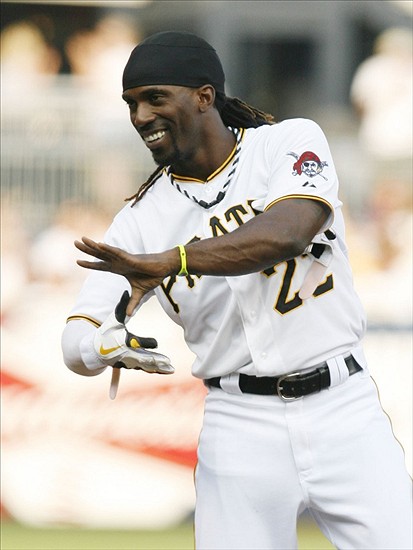 The Pirates believe in the power of Zoltan

Carole Kunkle-Miller was in the stands at PNC Park recently when she noticed something odd. Pirates players and fans were making strange hand gestures.

As a certified sports psychologist, she figured something significant was going on.

“I thought they were just being funny, and then I realized there was a meaning behind it,” said Ms. Kunkle-Miller, who has been practicing in Mt. Lebanon for 12 years.

It means the Pirates are winning and the players and their fans are having fun.

The hand signals form the letter “Z” for Zoltan, a character whose pending arrival is celebrated by a group of losers in the 2000 movie farce “Dude, Where’s My Car?”

It became prominent among the players in May after catcher Rod Barajas belted a game-winning home run against the Washington Nationals at PNC Park. As he rounded third, he found his teammates waiting for him at home plate, their fingers interlocked to form the letter “Z,” a trend that Neil Walker helped start earlier this season in Atlanta.

“We just started doing it, we’ve been raking ever since,” said starter A.J. Burnett. “That was my favorite part of the night, seeing 20 guys behind home plate doing that. It shows you what a group we have.

“It gives them a sense of shared goal and that positive message of winning. It unifies them,” said Ms. Kunkle-Miller. “I remember when the Pirates were in the World Series [in 1979], they would play ‘We Are Family’ to rally the fans and get everybody going. This is a variation on that.”

Like playoff beards and the Green Weenie and the Terrible Towel.

“Athletes in general like to be part of a team,” said Aimee Kimball, director of mental training at UPMC Sports Medicine on the South Side for almost eight years. “So something that they all have in common, like an inside joke, bonds them a little more. And the fans then take it to another level.”

As do the merchants.

Dan Rock, general manager at Common Wealth Press on the South Side, said he and his co-workers were quick to seize on the symbol and have been selling T-shirts depicting the “Z” for a couple of weeks. Since then, they’ve been seeing the shirts pop up on fans during Pirates games.

“We don’t try to find T-shirt opportunities, but they seem to happen quite a bit with our sports teams,” Mr. Rock said. “It’s pretty popular right now, even though they don’t have any words on them. Just the hands.

“That’s what a lot of our stuff is. If you’re not from Pittsburgh, you won’t get it. We get people who come in our shop all the time and say, ‘I don’t understand what these shirts mean.’ We’re definitely Pittsburghers making shirts for Pittsburghers.”