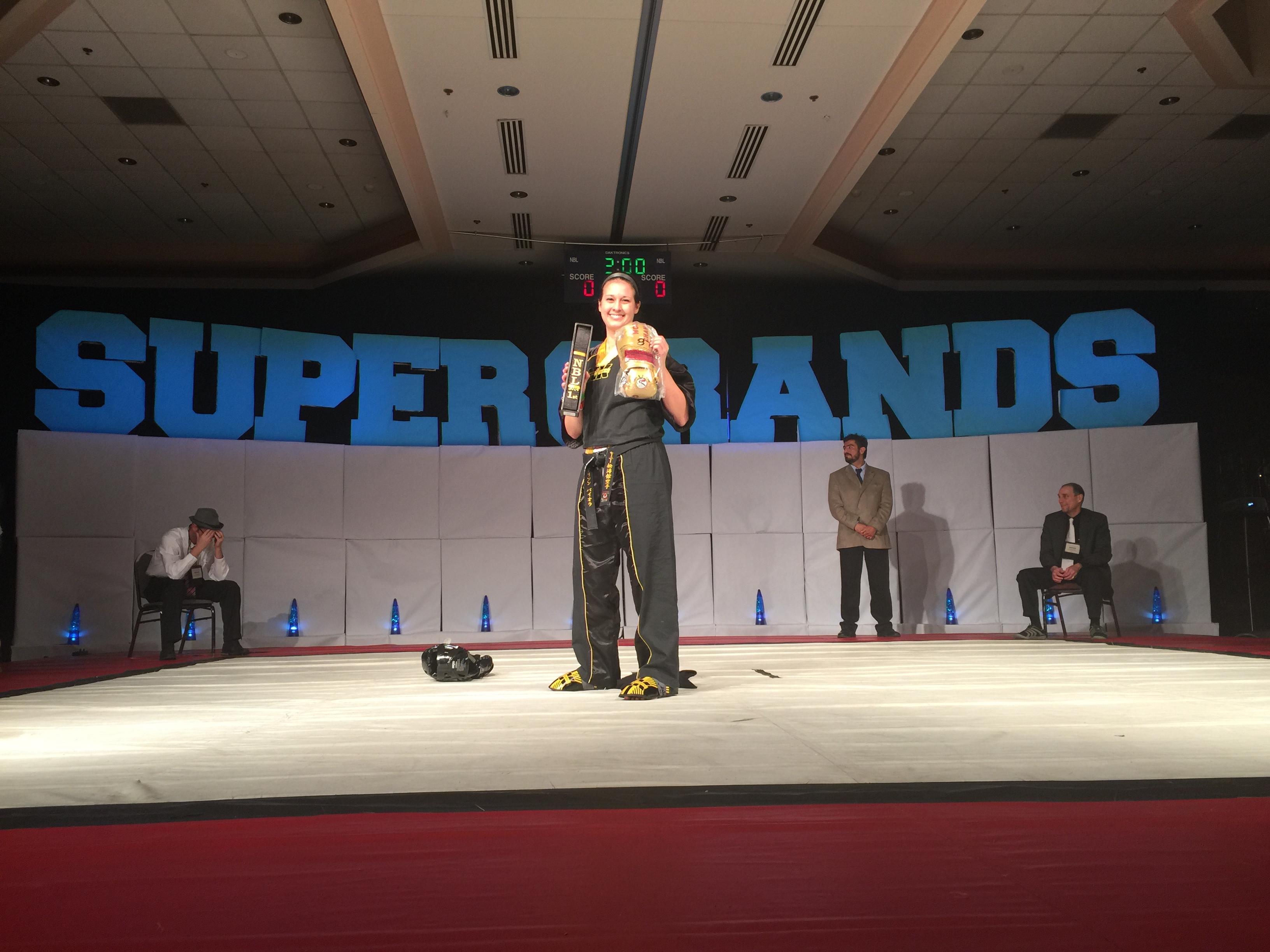 Winning World Titles is nothing new for the Viola family, especially for Duquesne University law student Ali Viola.  Over the course of the past decade, she has become a 7x National Black Belt League (NBL) World Champion with international honors that have made her the most successful female karate fighter in Pittsburgh history. She has followed in the footsteps of her martial arts pioneer father and International Champion brother, Bill Viola Sr. and Jr.  Although she doesn’t have anything further to prove on the mat and wasn’t planning on competing in 2014 due to college commitments, it was a very special season for the family.

The 2014 World Games marked a ceremonial passing of the torch, a karate tradition that has been a rooted in Pittsburgh for fifty years.  Ali Viola competed alongside her 4-year-old niece, Gabby Viola, the youngest competitor at the World Games and the next generation of Violas to represent Pittsburgh.

The 25th Annual Sport Karate World Games known internationally as the “Super Grands” was held 26th-31st in Buffalo, New York. The tournament is sanctioned by the National Black Belt League (NBL) and Sport Karate International (SKIL) which are responsible for the largest sport karate ranking system and league for black belts in the world. The competition is the equivalent of the Super Bowl for martial arts with over thousands of world class competitors representing North America, South America, Asia and Europe each year at the Games. The competitors must compete at a series of regional and national events to earn a seed and qualify for the competition, a process similar to NCAA tournaments that is required to secure an invitation.

Gabby’s Aunt [Ali] added two World Titles to her resume, one for Women’s Middle Weight sparring (defeating a contender from France in the semi-finals and then the number #1 ranked fighter from California, Ashlee Grant, in the finals); the second victory was a team title that included teammates Willie Hicks (Texas) and Luis Jimenez (Mexico).  Jimenez, a friend of Ali’s coach and brother Bill, also entered his son Joey Jimenez (the second youngest competitor at the World Games).

Gabby and Joey formed a unique bond that extended beyond the ring as they learned about family, respect and tradition.  Although neither Gabby nor Joey won the overall division (Gabby 4th and Joey 6th) they learned something much more valuable—the importance of carrying on a legacy!  Each walked away with an Amateur International Title and took the first step towards creating their place in martial arts history.

As Viola Sr. says, “Titles come and go, but a legacy is forever.”  The school’s motto is “Building Champions in Life.”  He prides his students on being community leaders and exceling in the education.  Ali Viola is a first year law student at Duquesne University and former Division-1 soccer star at Youngstown State.  She currently works at Eckert Seamans Law Firm and is an assistant coach for “Team Kumite” the all-star travel team founded by her brother.  She avidly supports the Western Pennsylvania Police Athletic League and also trains boxing at the Third Avenue Gym downtown Pittsburgh in her free time.

Gabby Viola is currently a yellow belt in the Norwin Ninjas program at Allegheny Shotokan Karate and is coached by her father (Bill Jr.) and instructed by her Aunt (Ali) and Grandfather (Bill Sr.) aka “Papa Sensei.”  For the past fifty years, the Viola name has been synonymous with martial arts excellence and Gabby is next in line to carry the tradition.  More importantly, she is learning how to build character through martial arts.  Viola Jr. adds, “Respect, discipline and focus are the cornerstones of karate and those traits will help you throughout your schooling, your job, and life.”

For generations, the Viola family has put Pittsburgh on the map in the world of martial arts.  Bill Viola Sr., the family patriarch, has been a pioneer of karate since the 1960s and is credited as the co-creator of the sport of mixed martial arts (MMA) in 1979, a decade before the UFC was a household name. In 2011 The Western PA Sports Museum and Heinz History Center honored him with an exhibit documenting Pittsburgh as the birthplace of modern MMA. In all, Viola Sr. has five children [Bill Jr., Addie, Jacque, Ali, and Joce], all of whom have earned black belts and excelled in international competition.

Bill Viola Jr. has created the Mecca for martial arts in Pittsburgh, promoting the region’s largest and most prestigious competition known worldwide as the “Kumite Classic.” He’s an accomplished martial arts author and movie producer whose credits that include Tapped (2014) starring UFC Champions Lyoto Machida and Anderson “Spider” Silva.

About Allegheny Shotokan:  Bill Viola Sr. established Allegheny Shotokan Karate in 1969, and has since produced more World Champions than any other school in the Pittsburgh region.  The school has been representing Pennsylvania and the United States at the World Games dating back to the establishment of the league.  www.alleghenyshotokan.com

Other students from Allegheny Shotokan and Team Kumite who represented at the World Games were: