Congrats to Team Kumite and Allegheny Shotokan Karate Black Belt Connor Burns on earning his Eagle Scout award!  We are proud of all our well rounded students.  Connor is currently an assistant instructor in the Norwin Ninjas karate class. 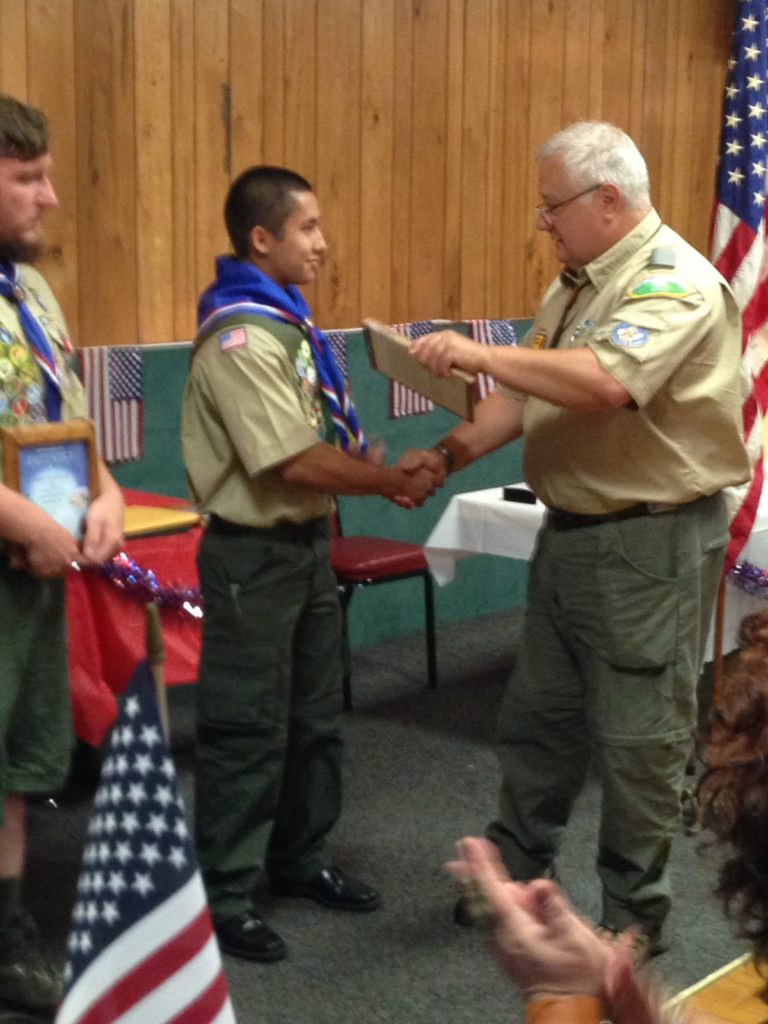 Connor Burns pictured above with Pittsburgh Steelers Brett Keisel and Hines Ward on the set of the Hines Ward Show.

Connor Burns is currently a senior at Trinity Christian School in Pittsburgh, PA.  Burns transferred from Kiski Prep in 2012 in order to continue his training in the sport of karate and pursue his dream of winning a National Black Belt League (NBL) World Title.  He is currently the #2 ranked competitor in of the Can-Am National Conference.  He has earned a seed for the 2012 World Games held in Buffalo, NY. Connor is recognized as the #1 ranked competitor in Pennsylvania in the 15-17 year old 143- lb Sparring category.  Connor has been studying Shotokan karate for over 10 years and won numerous state and regional titles. He is a member of the prestigious Team Kumite all-star travel team.  The team is responsible for the only NBL World titles in the Pittsburgh region over the past decade.

He was honored in 2010 by Trib Total Media and selected to receive the “Outstanding Young Citizen Award” in recognition for his exemplary character, outstanding academic achievement and generous community contributions.  He was honored for his dedication in supporting local food banks through the “scouting for food” initiative.  He also volunteers his time weekly to mentor younger kids apart of his karate school and competitive sport karate team.

Burns is a well rounded scholar athlete.  In addition to his martial arts training, he is deeply committed to earning the Boy Scouts highest rank of “Eagle Scout.”  As a member of Troop Unit No. 257 he is currently an Eagle Scout candidate working on his final project to benefit the Norwin Public Library.  The Eagle Scouts are expected to be leaders in life, and set an example for the entire community. As a senior patrol leader, he was responsible for 65 kids in charge of organizing all troop events, meetings and activities.  Burns finished the 2011 school year with a 3.75 GPA.

Connor is also an accomplished pianist, playing since he was 4 years old.  He was selected to perform for the CFA commencement program in 2009, and has volunteered for numerous chapel services at Christian Fellowship, Saltsburg Baptist Church, and Calvary Baptist Church throughout the years.  He is a model student, champion athlete and avid supporter of the community.

Allegheny Shotokan and Team Kumite represent Pittsburgh Karate on the Hines Ward Show. WPXI host Alby Oxenreiter, Brett Keisel and Hines were on hand for the program that features Positive Athletes in Pittsburgh.  Connor Burns, Dominic Leader, and Coach Bill Viola all represented sport karate and martial arts.  Hines was able to learn some karate on air, and warned the Baltimore Ravens to watch out!

Here’s a clip from behind the scenes on the Hines Ward show on youtube:

The demonstration included Hines learning to block a roundhouse kick and counter with a reverse punch. Connor Burns was interviewed by Hines for his community service and taking time out to mentor younger kids. He emphasized self-discipline and the confidence that karate instills. Team Kumite sported the custom kumite classic black & yellow all star gear gloves. Yeah, Champions bleed black & gold! The team is based in North Huntington Irwin, PA. Dominic Leader was the first recipient of the Western PA Positive Athlete award for martial arts last year and continues the tradition of team kumite with the program!

From dancing with the stars, football and even karate, Hines ward is a true sport and great role model! Visit his website http://www.positiveathlete.org/

This fall, Ward will host a weekly show on Saturday evenings.

“Pittsburgh has given me so much, so it’s great for me to come back once a week and be part of the show,” said Ward.

The station will now be the home of two weekly shows hosted by future hall of famers.  The Jerome Bettis Show also airs on WPXI-TV.

On Friday, Ward met the WPXI-TV team and caught up with staff members whom he already knows.

“I’m going to miss the competitive nature of football, but I’m excited about being a part of a new team.  You guys are my new teammates and my new family,” said Ward.

The new show won’t just focus on football.  It will include other hot topics of the day.

“Given his broad appeal to a large audience, Hines has the chops to tackle topics that may be a bit non-traditional for an ex-athlete,” said WPXI-TV General Manager Ray Carter.

The Super Bowl XL MVP is one of only eight NFL players to have 1,000 or more career receptions.  Ward played for the Pittsburgh Steelers for 14 seasons before retiring this year.