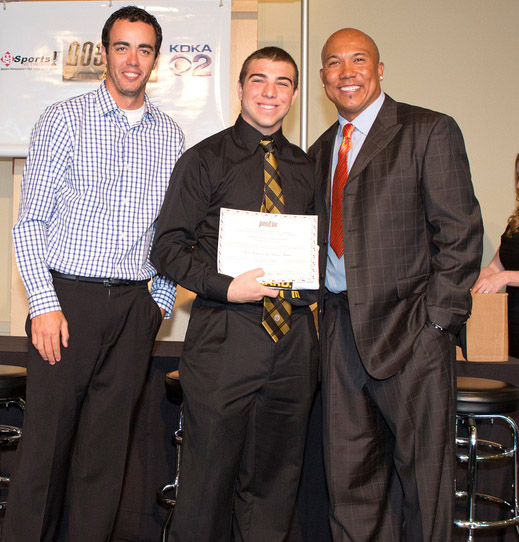 Leader, a Senior at Norwin High School, is not only a scholar athlete but a genuine positive role model for today’s youth.  He is a member of the National Honor Society ranked among the top 10 of his class, recently honored for representing that top 5% of the school. He is a well rounded student elected 2011 Home Coming King and Sr. Class Officer serving as Secretary. Dominic helps organize the school’s annual blood drive and is a big supporter of the Walk for Juvenile Diabetes (a disease that affects one of his close friends). He also supports the Walk for Grace and other charitable fundraisers in the area. As an active member of the Interact Club, he joins a group of dedicated students who perform volunteer work in the Norwin area. Dominic mentors youth in Westmoreland and Allegheny County though the art of Karate. He has been a Student at Allegheny Shotokan Karate for 15 years, joining the club when he was just 3 years old. He is dedicated to making a difference in kids by donating all of beste online casino his free time to working, training and coaching younger students. He travels with the across the country as an assistant coach for Team Kumite, an all-star karate team based in Pittsburgh.

Over 170 nominations from coaches, principals, athletic directors, teachers and parents were submitted, representing 75 different Western Pennsylvania high schools from as far away as Erie, PA. In addition to excellence on the field, each nominated Positive Athlete was required to show characteristics such as an optimistic attitude, teammate encouragement, servant leadership, heart for others, ability to admit imperfections, giving 100 percent all the time, and realizing the team as more important than the individual.

“Being a Positive Athlete symbolizes something,” said Ward. “I wasn’t even the most talented guy on my football team – there were a lot of guys who had more talent. But I think what separated us was their negative attitude. I think that’s what the Positive Athlete Voting Academy saw in these 26 high school athletes as well”.

The event was emceed by KDKA sports anchor Bob Pompeani, with assistance from MSA Sports broadcaster’s Lanny Frattare and Don Rebel. In addition to an award certificate signed by Mr. Ward, award winners received an autographed Positive Athlete Dedication t-shirt and they will be guests of the Pittsburgh Pirates during a home game on May 9th where they will be brought onto the field to watch batting practice and meet players.